It’s that time of year when many companies start releasing their annual software quality reports for 2015/2016. For example, Zephyr recently released their 2015 How the World Tests report, and it’s filled with lots of testing tidbits that you need know. 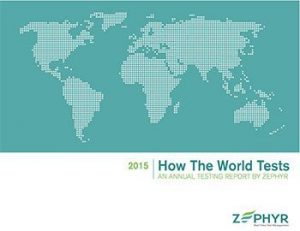 One of the questions was, “Name any automation tool you’re currently using or planning to use,” and 42% percent responded that they were using Selenium for test automation. The most popular tool after Selenium was UFT/QTP at 9%. That finding is probably not surprising to anyone that has been doing test automation for any amount of time. 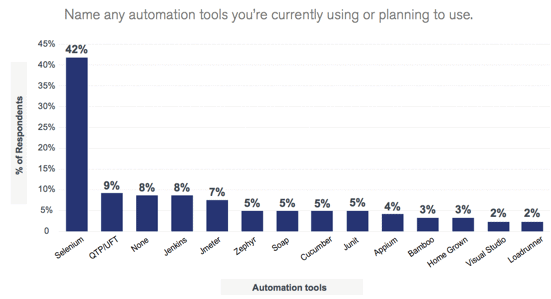 I don’t really feel that it’s a fair comparison, however, because one is just for web browser automation (Selenium) and the other can handle web browser automation and thick client automation. If you work for a large enterprise like I do, you typically need both types of software testing tools. But more companies are moving to straight web-based applications, so this trend will only increase over time. Also, if you take a look at the Indeed.com trends, you’ll see that more and more employers are listing Selenium as a requirement in their job postings. 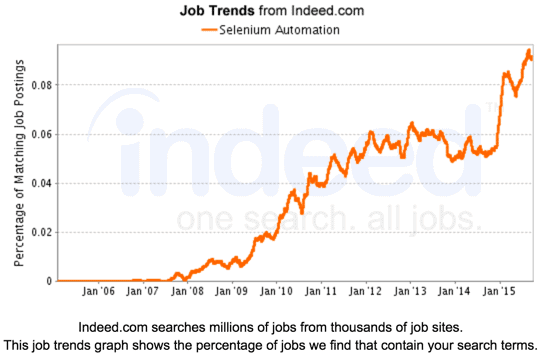 What is most interesting about this is that if you looked at this a few years ago it probably would have been reversed, with most users using UFT/QTP and then the next most popular one would have been Selenium. It just goes to show how quickly things can change in our field and why you need to pay attention to technology trends over time. So, if you don’t know Selenium yet, you really should learn it.

Zephyr’s report also predicts that while Selenium should gain a little ground in the coming years, there is still a bunch of other software testing tools that will fracture the usage. I see thing a little differently; it’s not so much a choice between Selenium and another tool, but rather a merging of open-source and vendor-based solutions. 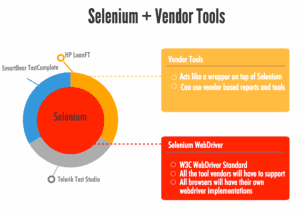 Merging of Selenium and Vendor Tools

As I mentioned in my New Year’s 2015 trends report, I predicted that more and more vendors would be embracing Selenium – and not to brag, but I was right. This will continue to be a trend in 2016 and beyond with vendor tools adding more and more support for Selenium.

In 2015 we saw Smart Bear continue to add more Selenium support to their automation tool, Test Complete — but what really took everyone by surprise was HP’s announcement of LeanFT at HP Discover in June. Essentially, Lean Functional Testing (LeanFT) combines the best of both the vendor-based and open-source worlds by morphing Selenium with some key functionality currently found in UFT.

Selenium is not an automation tool — it’s just an API. You really need to create a lot of customer code to add functionality to it where vendor tools can act as a wrapper; adding things that most testers are familiar with, like an object spy, object repositories and reporting features.

Of course, as we’ve discussed before, vendors are not doing this out of the goodness of their heart. There is currently a W3C WebDriver standard in draft form; once this is approved and becomes an official, standard browser vendors will be responsible for creating their own browser-based implementation of Selenium WebDriver. Once that occurs, then all the tool vendors will have to support Selenium because it’ll no longer be just their open source tool; it’s actually going to be a W3C standard that tool vendors will have to support.

Once it becomes a standard, I’m hoping it will make automating the browser much easier (even for IE) since each browser vendor will own their respective implementations and have a vested interest in them.

A good example of this approach can be found in my TestTalks interview with Peter Kim, where he talks about how his Selenium framework uses Telerik’s Test Studio to make it easier for his QA engineers to use object identification, test runner, and the element repository features that Test Studio provides. He discusses how this integration of Selenium plus a vendor-based tool has helped his team automate in a manner that is really fast and scalable.

As with most things in life, I don’t think there are black and white choices between one tool or another but rather a merging of the tools and using the right tool for the right job. As we’ve seen in this report showing Selenium replacing QTP as the dominant test tool in the industry, don’t fall in love with any one technology, because it can change at any time.

4 responses to “Selenium and Vendor Based Tools”