Well, it's the beginning of a New Year! Time to set goals and make some New Year's resolutions.

Around this time of year, I always take a quick pulse of the technology trends that are going on and how they might impact me in the coming year.

This helps me to focus on any gaps in training that I might need to fill in order to be effective at my job, and to keep my skills up-to-date and myself employable.

This is the same process I outlined last year in my post Test Automation Trends for 2014 – How to Keep You Skills Up-to-Date. I decided to make this a yearly post since I've gotten a few request asking me to do a 2015 update.

Before we get into which skills to work on this year to make yourself an in- demand test engineer, I want to go over how I did with my 2014 forecast — and make a few new ones for this year.

(NOTE: I don’t claim that this is a scientifically accurate method but rather a quick and dirty way to “guesstimate” what skills I should focus on.)

How did I do last year with Automation Testing Trends?

One of the biggest trends I saw last year was that vendor tools like HP's test tool suite (QTP/UFT) were on a downward trajectory. Selenium appeared to be the clear winner for the top must-learn automation tool, and I believe it will continue to become the must know web based automation tool in 2015.

Looking at Google Trends and selecting the Forecast option shows an upward trend in search popularity with some small dips. 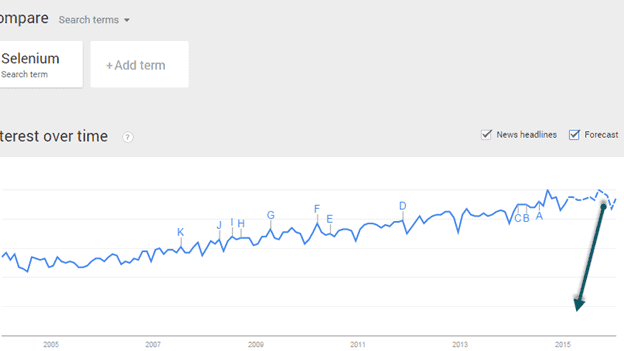 Where I think I was wrong in 2014 was when I said that that tool vendor tools like HP Unified Functional Testing were slowly dying off.

While I don't see vendor- based tools making a comeback anytime soon, I do think we will start to see a new twist and new life breathed into vendor- based test tools in 2015.

During the coming year, I think we're going to see more and more vendor- based test tools embrace open-source tools like Selenium. A great example of this is that in the last few weeks of 2014, SmartBear announced that their latest release of TestComplete 10.5 would support Selenium.

With TestComplete 10.5, you can now call Selenium-based tests from within TestComplete and have all your test results in one test report. Cool!

If I were to break out my 2015 crystal ball, I would definitely see other test tool vendors doing the same. For example, there's no reason I can think of that will stop HP from coming out with something similar that will allow their tools to integrate with Selenium as well.

I don't work for HP, and I don't have any insider knowledge that this is in the works, but I just can't see why HP UFT couldn't have functionality that allows it to easily integrate with Selenium.

The main reason I think this is going to happen is that in Episode 28 of TestTalks I interviewed Jim Evans, the main developer behind the IE Selenium Driver and .Net bindings, and we talked about the Selenium WebDriver W3C standard.

W3C is basically the standard that all companies follow when they are doing development. One of these standards is for the Selenium WebDriver implementation. Once it's a standard, it will give browser vendors a specification they can use to implement as part of their browser delivery — giving them a web driver that is part of their browser!

So browser vendors like Chrome, Firefox and IE will be supporting their own browser-based implementation of Selenium webdriver out of the box.

I've been talking about the importance of headless testing for a while now, and I expect it to become even more important in 2015 (and beyond).

When asked what their top automation best practice was, almost every person I spoke to last year on Test Talks pointed to the test pyramid, and the fact that we should avoid having too many UI-based tests.

Instead, we should have more unit and integration tests and less GUI tests.

This is an area that we as automation engineers should be guiding our teams towards. The more UI tests we have, the harder it's going to be to create reliable, maintainable test automation test suites.

It follows, then, that the more you know about xUnit frameworks and REST- based testing library tools, the better equipped you will be to handle this change.

In addition to the test pyramid, another reason for more headless type testing is that the very types of applications companies will be creating are going to be increasingly centered on APIs. 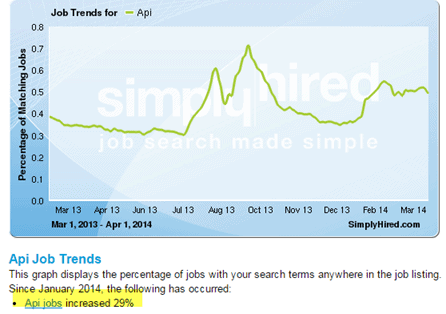 Think of things like NEST, which allows you to remotely monitor your thermostat by using a sensor to communicate information over the internet using http/https.

I think we will see an increase in more and more devices that don't have traditional user interfaces in terms of software development.

We are living in an ever-connected world with all kinds of things connecting to the internet. For example, check out the large growth of the term “internet of things” in Simply Hired and Google trends: 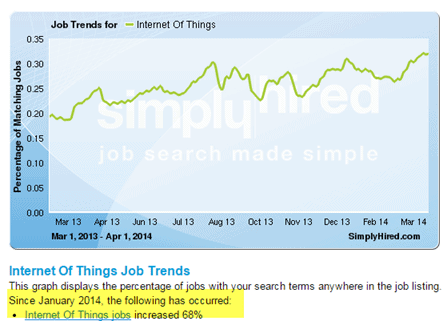 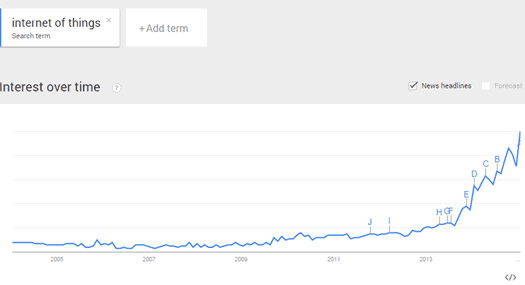 I think this is another indication that soon all kinds of crazy things are going to have sensors embedded in them. For an example, check out this video of David Rose, the author of Enchanted Objects: Design, Human Desire, and the Internet of Things.

Also, with more and more devices now connecting to the internet, think of all the possible security issues!

You don't need to look very far to see some recent event in the news exposing the hacking of some high-profile companies.

In August of 2014, Apple's iCloud was hacked into, and the hackers were able to get a hold of a cache of private photos. Many of them were celebrities' intimate photos that were then released to the world on all the websites.

Even more recently, someone hacked into Sony and released some very embarrassing private email communications between some studios big wigs and other sensitive employee data.

I see the need for heightened security being another 2015 trend. More and more companies are going to be focusing on it because they won't want to make headlines for being hacked or having poor security. Companies take notice when other companies are embarrassed this way, and because of this I see more and more organizations jumping on the security bandwagon this year.

What is really scary is that I recently took the Pluralsight course How to Hack Your API-Security Testing by Troy Hunt, and learned just how easy it is hack your API using simple tools like Fiddler.

Also, the Internet of Things sensors we talked about earlier are exactly the type of APIS that can be easily hacked using some simple techniques that Troy demonstrates.

So, if you're a test engineer I see more and more opportunities in security testing in 2015.

Now that we went over my 2015 automation predications, let's look at some possible skills to work on.

What I like to do is search for the term “test automation” in an indeed.com job search around Boston, MA to see what the requirements for most of the listed positions are.

I then make a list of all those requirements and do a search for trends. This helps me determine if my skills are up-to-date, and I then focus on the ones that are the most popular or that would help me get another position if I needed to.

I look at the first 30 or so job listings, then add some of the prerequisites to a spreadsheet. I then mark the number of times the prerequisite appears. Here is my list for test automation 2015 in the Boston, MA area.

Next I look for each perquisite to see how it is trending in Google and Simply Hired trends.

Next I take a look at the top ten perquisites and see how my current skills compare and what my weaknesses are. This tells me that if I was ever laid off or had to change jobs, what skills I should work on in the new year. Luckily, most of my current skills and what I'm using every day match up with the top prerequisites — with a few exceptions.

I was surprised by how many local companies listed SQL as a prerequisite. I know SQL, but I would not call myself a SQL guru –so that's one skill I might work on this year. I'm also not that strong in Linux or Perl so those are two other skills I might work on polishing up in 2015.

I also look for future trends, or x-factor skills. Those are the ones that might not have appeared in my prerequisites, but that are nevertheless growing in popularity. Those skills are the ones that I will definitely work on; I'm going to learn APPIUM this year.

The last thing I do is look for keywords that the group I'm in uses and look at their trends. For example, we started doing continuous integration a few years back and it's a subject that comes up quite often in team meetings. So taking a look at some of these keywords turns up the following:

What does Gartner Say?

The very last thing I look at is the yearly Gartner top 10 technology trends report to get an overall picture of what the overarching trends might be outside of test automation.

After reading the Gartner article and looking at their top 2015 trends it's funny how well my lower-level test automation skills/trends line up with their big-picture trends.

This at least tells me that the technologies I'm dealing with will be in demand regardless of the industry I work in — or if I have to switch careers completely. 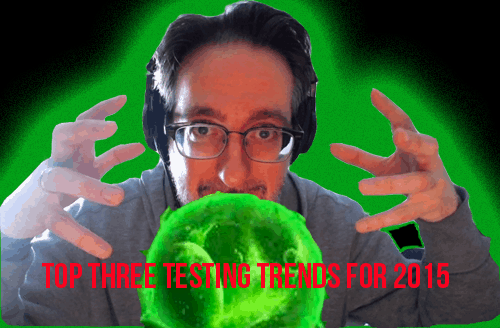 Automation Awesomeness for your ear buds

If you want to hear more, check out my podcast Episode 33 Recap and Test Automation Trends for 2015, where I cover some of this in more detail.

(NOTE: I don’t claim that this is a scientifically accurate method but rather a quick and dirty way to “guesstimate” what skills I should focus on.)

I'm sure you've all heard of Selenium by now. It's a popular tool END_OF_DOCUMENT_TOKEN_TO_BE_REPLACED

Just because you can automate tests doesn’t necessarily mean that you should. In END_OF_DOCUMENT_TOKEN_TO_BE_REPLACED