Elon Musk recently tweeted that “We need to be careful with AI. Potentially more dangerous than nukes.” 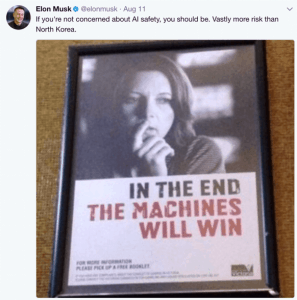 Of course, this got me thinking about the one subject that I’m always interested in–me.

As a test automation engineer, I’m always on the lookout for tools and technology that will help me create better quality software faster.

I believe it’s only a matter of time before AI and robotics start making an impact on the software development world. We're already seeing some of the early adaptors of AI with test automation companies like Appdiff, ReTest and Testim.

Is this good or bad for us as testers? Are our jobs in jeopardy? Should we be concerned?

That’s why I was excited to find out what “the Elon Musk of Test Automation” Jason Huggins (the creator of Selenium, Sauce Labs and Tapster Robotics) had to say about this.

At some point, you design something that acts like a human in every way. So at that point, you have something like the Terminator where it can test, and it can do any interaction a human could go to the point where it's so good you don't know its a robot.

So those are the two things. You have the Matrix or the Terminator as far as functional testing will go.

And then as far as that where humans do I think at some point you're not exactly writing tests like lines of code. You might be modifying like AI algorithms that spit out test suite. And so you're kind of like setting the initial conditions to spit out all the various scenarios that you want.

The other potential scenario is you're throwing a lot of spaghetti at the wall. Like you're doing a bunch of stuff it's random, and then the tester is more almost like a data analyst where you're looking at a lot of dashboards.

It becomes very much like a data analyst kind of thing. So maybe you're not you're not clicking the buttons robots are doing that for you but you're analyzing their behavior. Sometimes you intend them to do stuff. Sometimes it's random. So I could see it like testing will never go away.

But maybe the days of someone like looking at the Selenium API and say like how do I you know get that window to go away like how do I make that a double-click and a single click.

You won't spend as much time doing that. That's my theory.

When will the Robot Apocalypse occur?

So how soon do you see that happening?

I don't know. We are in the middle of this existential crisis — robots whatever you want to call it.

I read all the articles, but there are some people that doubt that robots will take over the world. They ask if the robots are going to take peoples jobs where are they. I don't see it right.

Sometimes robots are like a metaphor for the software, not the physical robots.

But either way, it's like I think everyone's expecting it and super nervous is going to happen today or tomorrow.

But we've got some time. I think we've got 15 years to figure out to find our next job right. I don't believe that it's happening next year.

The Re-Birth of Manual Testing?

One of my other hobbies is looking up how the job descriptions for various testing jobs I mean this is a big debate right now manual-testing vs automated testing what do you do as a manual tester?

Did you know there's a totally awesome manual testing job at Tesla and it's basically like you get to drive around the track at 90 mph all day long like that's your job? You drive Tesla cars. That's manual testing.

So I think the job is absolutely changing.

You're not going to be sitting at a keyboard mouse clicking buttons. You might have to like hike up the half dome because you're testing you know some GPS connections. I just imagine some weird scenario. You have to get out in the world and test something. If you have your Terminator but the battery pack doesn't last you get all the way up the half dome at some point you'll have to send an expedition to test all the equipment. It will always be there. The jobs are going to severely change it's not going to be you know a cup of coffee in the corner and go to the office, write a bunch of tests you know checking your spreadsheet.

I think those days are kind of over.

I'm sure you've all heard of Selenium by now. It's a popular tool END_OF_DOCUMENT_TOKEN_TO_BE_REPLACED

Just because you can automate tests doesn’t necessarily mean that you should. In END_OF_DOCUMENT_TOKEN_TO_BE_REPLACED