Have you ever encountered virtual memory issues when running long QuickTest Professional or Unified Functional testing scripts? They tend to occur while running either long overnight tests, or tests that have a ton of iterations. (If you're a sadist, your scripts might do both.)

Here are three things that might be causing your virtual memory issue:

Place all your functions in a global function library

A leading cause of virtual memory issues is when local variables and functions are used within Actions. When this approach is used, QuickTest does not release its memory until it closes.

For example, if you have an action that iterates 1,000 times and you've defined 10 local variables, after 1,000 iterations enough memory will have been allocated for 10,000 variables! Things get even crazier if you're using an action-based framework that involves multiple actions calling each other.

The medication to relieve some of these memory allocation symptoms is to move all your variables and functions into a QTP VBScript library. Creating a function library won't solve all your memory usage issues, but it will help drastically minimize your memory usage.

Once your script has a reference to the function library, you'll be able to call all the functions by typing them directly into your script. By creating a library file, you make your functions accessible to all your UFT scripts. Not only will this alleviate virtual memory issues, but it also will help:

If you don't know how to create a function library, take a look at the following example.

To create a function library you can either select File>New>Function Library in QuickTest Professional, or create a new file in a text editor like Notepad. For example: 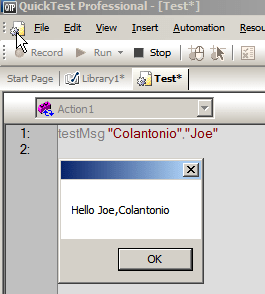 Your application is not releasing memory

There's no real solution for this if you're testing an application that's a memory hog. But in general, you might be able to free up some memory by minimizing the application. If minimizing doesn't help you should try starting and stopping your application for each test, or create a script that stops and restarts your application after a few tests have run. This is an issue I've commonly encountered when testing against IE, and I've found that minimizing the browser tends to solve things much of the time.

QTP/UFT is not releasing memory

Let's be honest. QTP/UFT itself can be a huge memory drain on your tests. If you're running tests that take hours and have lots of iterations you're inevitable going to encounter some issues. My advice is to restart QTP/Unified Functional Testing during replay, which will help to free up any memory that QuickTest Pro is holding onto. To do this you can use QTP's Automation Object Model. HP's knowledge base has a pretty cool code example on how to use AOM, as well as environment variables to help determine when to restart QTP after number of iterations:

(Source: The rest of this post is taken directly from HP's KB Site) The following set of instructions is a proposal with a on to generic approach to handle scenarios where QTP needs to be restarted:

1. Create a .vbs file (using AOM statements) that can be called from within QuickTest Professional. The .vbs file should check:

If QuickTest Professional is not running, launch it. Set some run-time settings, and start the script execution.

Example contents of the .vbs file:

Note: Update the .vbs file to specify the full path to the test you wish to restart.

3. In the Environment tab, select “User-defined” in the Variable type field.

4. Enter two new variables, it_start and it_stop. (You can use other names, if you wish, but you will need to change the vbs file also.)

5. Set the it_start value to 1. Set the it_stop value to the number of iterations you want to complete before restarting QuickTest Professional (for example, 1000).

6. At the end of the script (or in the last action), add code that will call the .vbs file when appropriate.

In the above example code, the Test Iteration Environment variable is retrieved and checked to see if it has reached the limit set in step 5 (1000 iterations in the example). If the iteration limit has been reached, the .vbs file is launched. The start and stop iterations will be captured and stored and QuickTest Professional is restarted (if needed).

Make sure you update the .vbs file reflect the iteration limit you set in your script.

You should be able to start your script now and it will shut down and restart QuickTest Professional after x iterations.

You should use the VBS file to launch the test script.

I'm sure you've all heard of Selenium by now. It's a popular tool END_OF_DOCUMENT_TOKEN_TO_BE_REPLACED

Just because you can automate tests doesn’t necessarily mean that you should. In END_OF_DOCUMENT_TOKEN_TO_BE_REPLACED