Luckily, at the last minute I was able to get a ticket (thanks Malcolm!) to HP Discover in Las Vegas, and I'm glad I did. During the conference, HP announced the new and soon-to-be-released automation tool, Lean Functional Testing (LeanFT), which I think is going to be an automation game changer.

Essentially, Lean Functional Testing (LeanFT) combines the best of both the vendor-based and open-source worlds by morphing Selenium with some key functionality currently found in UFT.

[tweet_box design=”default”]#LeanFT combines the best of both vendor-based and open-source worlds by morphing Selenium with some key functionality found in UFT.[/tweet_box]

Why yet another automation tool?

HP built LeanFT from the ground up to address the growing modern automation demands of continuous testing, mobile and dev-ops. What's really cool is that LeanFT fits into your developer's ecosystem, so your developers can still use their favorite IDEs, programming languages and unit testing frameworks, not to mention the added benefit of access to HP Web/Windows-based technologies that Selenium does not provide.

Remember — Selenium is only for browser-based testing and does not handle non-browser-based popups and windows. This is a major issue, as most experienced testers working in an Enterprise environment will tell you. Quite often, our test scripts have to deal with more than just web-based interactions.

For example, many end-to-end workflows deal with Windows or Windows-based applications or pop-ups. Cobbling together a solution using Selenium and some other libraries to automate these non-browser-based features is difficult and often less than reliable.

I, for one, work automating a modern AngularJS application, around which I created a Selenium/Java automation framework. Still, over the past few months more and more new functionality has been introduced that requires our Web apps to integrate with some thick client applications.

You can imagine my automation dilemma.

Our company's goal is to try automating as many tests as possible, and most of these integration tests could not be handled within the current framework. So what do you think happened? Rather than creating a bunch of manual tests, we ended up creating a second framework in UFT to handle those particular types of tests.

This approach caused all manner of confusion because I had to ensure that we used the right framework for the right tests as well as maintaining two separate code bases — a real nightmare scenario. LeanFT solves this issue.

With LeanFT, I can now use my existing Selenum/Java framework and still be able to handle these integration-type tests!

Using LeanFT provides its users access to a bunch of new tools that make testing in Selenium much easier — like the object identification center (think QTP GUI spy), which allows you from Visual Studio or Eclipse IDE to quickly spy on objects and identify unique values to use for your object identification.

Also — in another non-HP-like move, if you have an existing UFT license, you automatically have access to LeanFT at no additional cost. You'll now have the option to create UFT, LeanFT scripts or a combination of both.

The main features of LeanFT

Here are the main features and functionality that I was able to gather at the conference that LeanFT will include:

Now I know many of you are thinking what does this mean for me if I'm a UFT user? Do you have to move over to LeanFT?

LeanFT does not replace UFT

A key point to keep in mind is that LeanFT does not replace UFT! They are two separate products that address different issues. Your situation and organization will dictate which tool you choose.

Basically HP talked about three main users they thought about DevTesters, Test Automation Engineers and Subject Matter Experts and what their different requirements are to help explain how each tool fits with each user type.

This is the technical tester who is probably already using Selenium with C# or Java but is missing some of the functionality they had to leave behind when they moved over from UFT. These users are the target audience for LeanFT

These are the users that have already built automation framework in UFT and have some knowledge of other languages but have been perfectly happy with UFT. They will most likely continue to use UFT but based on projects might dabble with LeanFT.

These are your non-technical users who most likely will not have a need to LeanFT. They will continue to use tools like Business Process Testing (BPT) and Script less keyword driven approaches to automation.

For the users that most likely would not be using LeanFT don't' worry HP also made some other announcement about enhancement to UFT 12.5 that I will cover in another post.

And once against if you already have a UFT license you do not have to choose one of the other. You can mix and match depending on your projects needs.

If you've been torn between sticking with UFT or jumping over to Selenium now you have a better option –LeanFT. You can leverage your exiting UFT experience and knowledge and move to the same development environment your developers are using. This will significantly shorten your learning curve in having to pick up Selenium.

Most important you no longer will you feel like a second-class developer's citizens being stuck with lame VBScript. You'll now have the power of using Java or C# and be able to use the same unit testing frameworks and tools as your dev's.

Bonus this should help foster better collaboration between you and your developers. 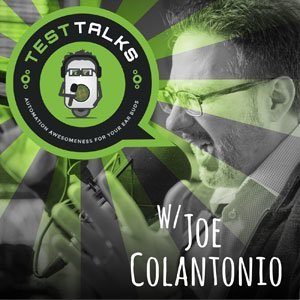 To hear all about LeanFT and some of my key take aways from HP Discover listen to my latest TestTalks podcast episode 55.

I'm sure you've all heard of Selenium by now. It's a popular tool END_OF_DOCUMENT_TOKEN_TO_BE_REPLACED

Just because you can automate tests doesn’t necessarily mean that you should. In END_OF_DOCUMENT_TOKEN_TO_BE_REPLACED